One of Rusviet's mobile fortresses, able to engage multiple enemies with an assortment of weapons.

The SHM-70 "Gulyay-Gorod" (ШM-70 Гуля́й-го́род, Wandering Town) is a massive mech unit produced by Rusviet. Bristling with weapons, it can take on almost anything on its own.

Many mechs have already entered regular service within the Rusviet Army, including specialized anti-armor, anti-personnel, and artillery variants. The largest of these, the SHM-70 "Gulyay-Gorod," by contrast, is a multi-purpose mech, equally suited to engaging infantry and other, smaller mechs.

This pride of Rusviet engineering is truly a sight to behold; one of the biggest and most imposing mechs to stomp the battlefield. It resembles the prow of an icebreaker ship on two heavily-built legs, with two huge smokestacks belching smoke. On the left side of the chassis is a colossal rotary magazine-fed rocket tube, on the right is a large naval-grade cannon, and on the shoulders and center of the "head" are three machine gun turrets facing all directions.

Heavy armor and armament make this unit good as a line-breaker, leading an attack formation to shatter enemy defenses. It can take and shrug off all kinds of incoming fire; with all its turrets and armor, it can ignore even gunner infantry and repel them with relative ease. Its main gun fires fairly fast, has good range, and a large AOE making it quite good against infantry and light units. It is also one of the faster heavy mech units, although still slow compared to almost everything else. Overall, this mech is ideal against infantry with a number of features making it excellent at crowd control especially after gaining a rank. Notably, its all-purpose nature is no lie, as even in mech battles it is no slouch when fighting its kin, and is even the second-best in a straight slugging match.

Like all heavy mechs, the Gulyay-Gorod is vulnerable to concentrated artillery thanks to its high profile and low speed. It trades thicker armor for a diverse armament, and the main cannon deals relatively light heavy-armor damage compared to that of the PZM-24 "Tur's" paired guns or the SKS-300 "Kaiser's" main weapon, although it fires a good deal faster than either. Its missile, while potent against infantry, does not deal as much damage against heavy armor units. However, its extensive bulk, rapid-firing guns, alongside its formidable missile weapon more than make up for its apparent lack of damage. Properly supported, this behemoth can crash and bash its way through even the sturdiest of defenses in the name of the Tsardom, and even unsupported it can defeat a Tur in single combat, and prove an almost equal match for the Kaiser.

Its primary weapon is a large cannon that deals strong damage to medium and light armor as well as infantry. However, it should be noted that the Gulyay-Gorod is excellent in Mech-To-Mech fighting, and even more so if it accesses its secondary. Its secondary, which it can access once it has reached veteran, is a missile launcher that after a brief priming period fires a rocket that nukes a sizable area. Finally, it is supported by three machine gun turrets each guarding a 120-degree arc of view that can also fire on the move. These weapons are incredibly powerful on a linebreaking superheavy platform, and speed unbecoming of such a cumbersome frame allows free engagement on any targets, as well as more expedient retreats when the need inevitably rises. 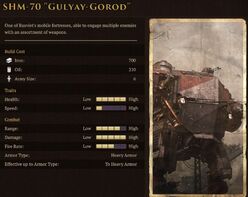 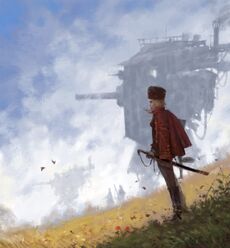 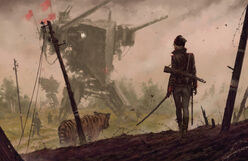 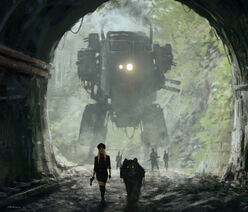 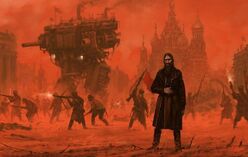