A flamethrower mech that incinerates entrenched infantry and structures with ease.

The SHM-56 "Ognivo" (ШM-56 Огниво, Flint) is a specialized mech unit produced by Rusviet. It wields fire to level squads of infantry and buildings once it gets in range.

Fire has long been a fascinating element of human life, as is its capability to destroy or create. This unit, however, harnesses it to devastate Rusviet's enemies in swathes of flaming fury. Its chassis is very wide and low-set, supported by two short front legs and a rear guiding wheel. The can-shaped cockpit is situated in the front with a small viewing slit. On either side of the chassis are two huge flamethrower turrets which can both be focused forwards or split into two arcs. Finally, at the very rear is the engine unit with a large smokestack.

Like the infantry version, the Ognivo is specialized at dealing with units that have taken cover either behind fortifications or in buildings. Its fire ignores all cover, dealing heavy direct damage to the infantry forcing them to either stay in cover and die, or try to flee. Unlike the infantry flamethrower, however, the Ognivo boasts improved range, damage, and can take much more of a beating with its medium-rated armor which helps compensate for its slow speed and short range. One of these can quickly level a base as well.

Its horrifying anti-infantry capabilities are balanced by its inability to combat most armor and its poor maneuverability. Like all mechs it takes extra damage from the rear and it cannot turn to face threats attacking from multiple directions. Lastly, its poor range and speed make it easy to bring down with anti-mech weaponry like field guns and artillery. Thus these units require ample support but one or two of these can be valuable additions to an attacking force.

The Ognivo's sole weapons are the two scaled-up flamethrowers mounted on each side of the chassis. These unleash a wall of flame that turns any enemy in front of the machine to ash, and can even melt light armor given the time to do so. 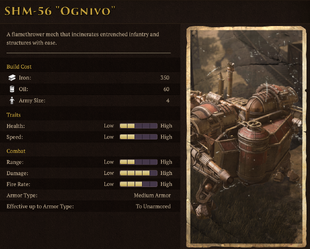 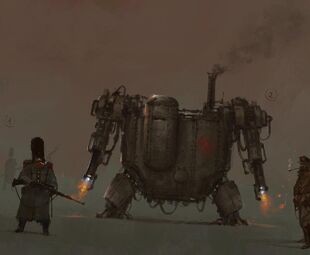 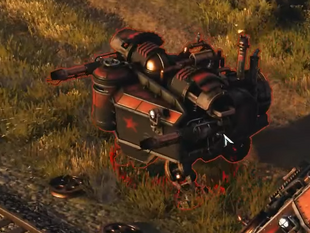