An anti-armor mech that rapidly unleashes a salvo of rounds against its enemies.

The SHM-79 "Nagan" (ШM-79 Наган, Revolver) is a mech unit produced by Rusviet. It excels in dealing with medium and light armored units with its battery of cannons while shrugging off return fire.

Built low to the ground, it resembles one of the old ironclad ships of the previous century and has the durability to match. The front end is particularly heavily armored with a huge iron plow mounted below the view slits. It moves primarily on two heavy legs mounted towards the front which drag it on its belly with a guiding wheel mounted towards the rear. Taking up almost the entire top of the machine is a battery of four cannons, each complete with an auto-loader apparatus. These are bolted in place, requiring the driver to turn the whole machine to aim its weapons. Instead of a plainly visible power plant, instead its exhaust tubes are mounted similar to those of a car.

The Nagan puts the "armor" and "busting" in armor-busting. It is the toughest medium mech on the field, starting out with just under twice the armor of a maxed-out Sd. KS-78 "Isegrim." and fires a steady stream of cannon fire that defeats other medium and light mechs with ease. The cannons do not hit as hard as most, but over time their rapid fire leads to high DPS, and it has the durability to survive such protracted fights. It also is not-half bad against infantry, even exosuit troops like the PZM-2 "Rycerz." Its ability also adds a good chunk of DPS mid-fight. In terms of durability, the Nagan is not able to blunt low-power attacks like the SKS 156 "Wotan" can, but its high HP makes it less vulnerable than the Wotan against hard-hitting attacks from enemies like Field Cannons (still, it should avoid taking shots from such threats if possible).

The Nagan does, however, turn quite slowly, has mediocre range, and a narrow firing arc. Thus, it struggles to deal with attacks from behind or on the flanks. It is quite slow, making it vulnerable to artillery and mortars, and, as with most mech units, it takes extra damage when attacked from the rear. Powerful attacks there from more agile units like the PZM-7 "Smialy" or gunner teams will see little chance of retaliation. Its cannons also have a fair chance of missing, it seems. As long as its flanks are covered, however, a couple Nagans at the head of a formation will spell doom for opposing medium and light armor.

The Nagan carries a quartet of rapid-fire cannons arranged like organ pipes which output a steady stream of damage or can be fired in quick succession for a burst of heavy damage. 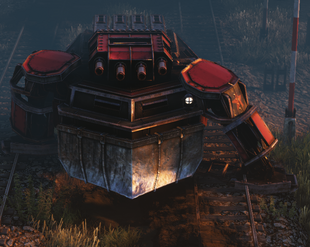 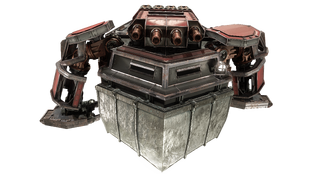 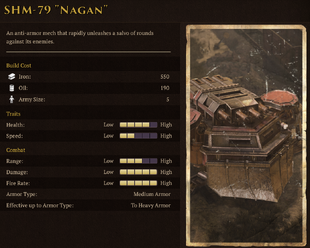