The SHM-86 "Kolokol" (ШM-86 Kолокол, Bell) is a light mech built by Rusviet. It can deal with infantry and light armor using potent close-range explosives.

This mech is designed to be fairly light as Rusviet machines go. It has a relatively small, can-shaped body with two digitigrade legs that give the mech good speed and agility. The joints that attach the legs are further protected by a pair of armored pauldrons. The crew can see forward via a slit in the armor and a spotlight is also mounted to the left front of the hull. Finally, atop the mech is a device known as a flywheel launcher for flinging explosive pucks as well as a loading ramp leading to the ammunition reserve.

The sight of a Kolokol on the field spells doom for any roaming squads of infantry without heavy armor or anti-mech support. Unlike the Polanian Republic's "Straznik" or Saxony Empire's "Grimbart," rather than gunning down infantry one-by-one with machine guns, it uses explosives to deal damage to whole squads at once. While lightly armored, it can weather a fair bit of rifle or machine gun fire, and a pair of these vehicles can quickly level infantry squads.

Kolokols are ill-suited to deal with anti-mech units, however. Gunners, especially attacking from behind, can take it down fairly quickly, as well as Field Guns, and it does little damage to medium mechs like the Lowca. Also, for a light mech it is not very fast and can be chased down by infantry if it tries to flee. Thus, these mechs work best in small packs to smash light vehicles and infantry squads. Light units that have bunched up together and/or have tried to hunker down are also fair game.

The Kolokol's sole weapon is a top-mounted flywheel device, also called a centrifugal grenade launcher, using two opposing spinning wheels to chuck explosive grenades. Their area of effect will do good damage to infantry, as well as briefly knocking down any infantry in the blast radius and leaving them momentarily vulnerable. 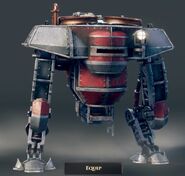 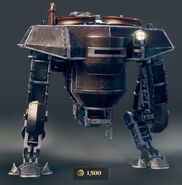 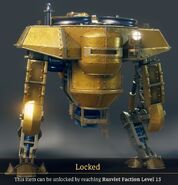 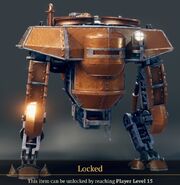 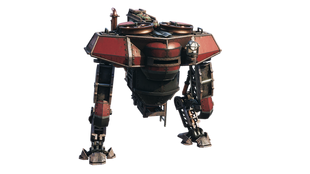 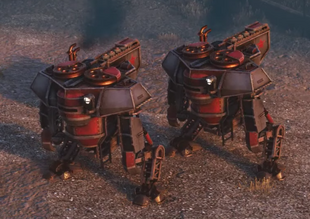 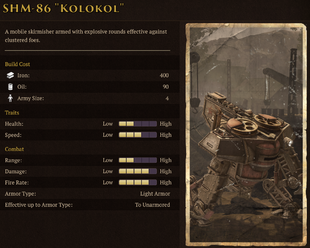