A heavy mech hunter that inflicts immense amounts of damage to all armor.

The SKS 156 "Wotan" is a heavy mech produced by the Saxony Empire. An armor-killer, it deals very high single target damage.

Enemy armor should rightly fear this eight-legged walker scuttling into view on the battlefield. Like the Isegrim, it is designed somewhat like a conventional tank but has eight short, armored legs not unlike those of a lobster or crab. The chassis is boxy and heavily armored, and on top is a fixed turret mounting two forward cannons and a pair of missile hardpoints.

The Wotan is excellent at focusing fire on single targets; its weapons deal heavy damage to all armor types. It is hard to outmaneuver as, while slow-moving in a straight line, it can turn surprisingly quick. It can rapidly bring down light mechs and is even fairly good against infantry, especially in pairs, as its cannons fire somewhat quickly. Best are its deadly pair of rockets.

Like many Saxony units, the Wotan suffers from poor speed. Despite its heavy armor rating it has relatively low health; even at elite veterancy it has less the half of the starting health of its fellow heavy the SKS-300 "Kaiser." It is out-armored by all other heavy mechs, and may come off worse against such machines. This softness and low speed make it very vulnerable to artillery like field cannons or anti-mech units like the PZM-11 "Lowca." It will do well with proper support, however, from units like Kaiser which can soak up much more damage while the Wotans supplement its firepower.

Its main weapons are a pair of large cannons fixed in the forward positions in an armored turret. Once the mech has gained a level it can fire a pair of rockets to deal even more damage.

Rocket Launch: The Wotan fires two powerful rockets from the sides of its main turret. These rockets can travel quite the distance and deal great damage to anyone who happen to be in the blast radius. 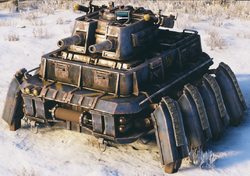 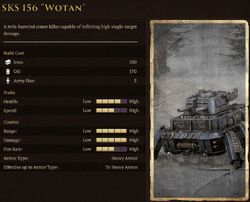 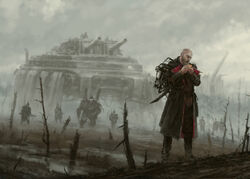