One of Saxony's heaviest war machines, armed to the teeth with a variety of weaponry.

The SKS-300 "Kaiser" is a superheavy mech unit produced by the Empire of Saxony. It is the pride of the Empire, Saxon engineering at its finest with toughness second to none.

It is the SKS 300 that is the true emperor of the battlefield and, as such, named "Kaiser." Equipped with a forward cannon and a heavy machine guns on each of its four sides, it is proven effective against both enemy infantry and mechs, with few nations possessing similar-sized walkers with which to counter it.

Few mechs have earned their name more than the "emperor." It is a particularly boxy and sturdily-built quadrupedal mech, resembling a steel bunker on legs covered with thick armor plates and lots of detailing. On each of the four sides is a ball-mounted machine gun turret, and mounted on top is a cannon mounted in place inside a bunker of its own. It resembles a turret, but it is locked forwards and unable to rotate without turning the mech itself. As to be expected of such a commanding figure, the Kaiser is capable of dueling, and killing every single other mech in the game, let alone the various infantry or carried weapons. Its fortress-like design is absolutely no coincidence.

The Kaiser is the unbreakable backbone of your army: the single most durable unit in the game (short of Icarus), starting with 2000 HP and heavy armor. This makes it very powerful offensively and defensively, heading a formation to soak up lots of fire and ignoring damage from almost everything except massed artillery. It performs even better on the defensive, where it can sit itself in front of its supporting units and lock down to unleash rockets. Its main cannon is quite strong with good range and the machine guns allow it to deal with infantry attacking from all directions, so being, Kaisers are truly good against almost anything even without numerical superiority, though they still appreciate it; few threats are as grave as a supported Kaiser.

Its major downside is that it is also the most expensive Saxonian unit to produce, and it high population cost severely limits how many can be fielded. Given its incredible strength, it would still be in your interest to supply at least two in a battle formation. Though, as with all things, even the Emperor is susceptible to fault, its main anti-armor firepower is only able to face forward and its rockets have limited range. Being one of the slowest units in the game, it can be kited to the sides or rear by agile units or quickly whittled down with artillery like field guns (provided they have sufficient numbers and positioning) although in a combined arms Saxon force, expect these tactics to be of lesser use. It works well combining its firepower and armor with artillery, mech destroyers, and anti-infantry backup while on the offensive, slowly crushing its way to victory for the Empire. Defensively, a formation of even just two of these terrifying superheavy constructs are enough to form something not unlike the castles and trenches of yesteryear, a nigh-impenetrable bulwark if given its desired support by the Empire's other weapons of war or a similarly-legendary mech.

The Kaiser's main weapon is a large cannon, which deals incredible damage to mechs and infantry alike, although it lacks the splash damage needed to deal with infantry efficiently. Furthermore it has a heavy machine gun on all four sides which can fire while moving, which makes this mech even stronger against infantry and light mechs. Reaching the first veterancy level allows it to use its special ability, which reveals a six-tubed rocket battery facing each side (except for the back), in which the cannon raises up to expose the launchers. 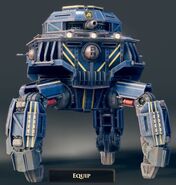 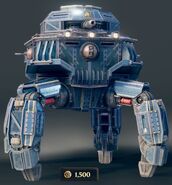 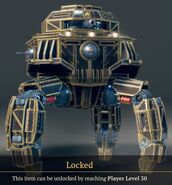 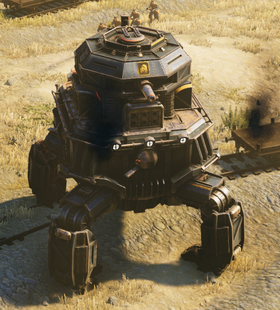 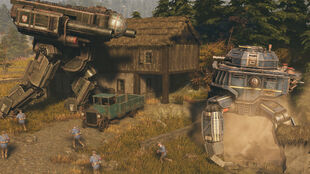 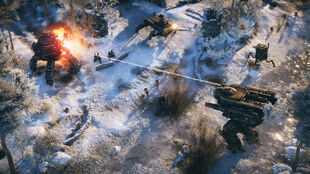 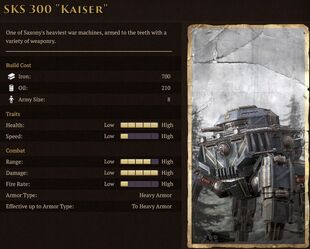 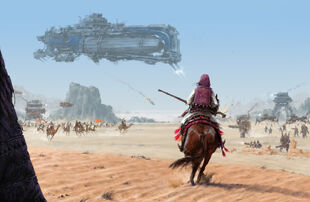 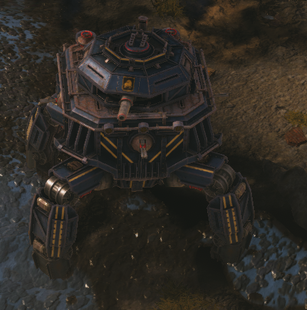 The "Kaiser" turning it's turret during the idle animation.
Community content is available under CC-BY-SA unless otherwise noted.
Advertisement