Saxonian Field Mortars or simply Mortars are weapon systems built by the Saxony Empire. They lob explosive shells overhead to crash down on enemies from a great distance but must be placed tactfully to be put to best use.

All faction's mortars are currently functionally and aesthetically identical (except for their crews in the latter case.)

In a time of rapidly advancing technology, not all old or conventional designs have ceased being very effective. Armies will often find a need for a weapon capable of indirect fire when the situation calls for it, and the humble but effective mortar often fits the bill. These heavy pieces consist largely of a tube mounted on a heavy metal sled, boxes of shells are fastened within easy reach, and the crew is protected by a shield. When moved, the tube and shield fold down to make the whole assembly fairly flat.

These indirect artillery pieces pack a punch at long range. Their explosive shells inflict heavy damage against all unit types and have a large area of effect, making them potent against units hiding behind cover or hunkering down in groups. Terrain and buildings that would normally prevent an attack without reposition or waiting present no obstacle as the shells fly overhead. This makes them very effective at softening up defensive units or grouped armies, especially with multiple pieces in a barrage.

Due to the explosive power of the rounds, however, mortars cannot fire at targets directly in front of them for fear of killing the weapon's own crew. The shells reload fairly slowly and their propulsion is also sluggish enough that sufficiently fast or agile units can get out of the way before it lands, especially at long range. In addition to these, being a weapon system it shares the same weaknesses as its fellow systems: In order to move, it must redeploy which leaves it unable to fire and deploying again takes a moment before the gun is brought to bear again. This primarily makes them support and defensive weapons, but very deadly ones in the right hands. 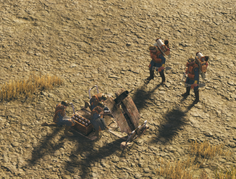 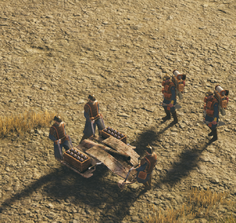