Saxonian Grenadiers are upgraded infantry units trained by the Saxony Empire. While they can still use the submachine guns afforded to them from being a Stormtrooper, they have the added bonus of being able to use grenades for more versatility.

The Fatherland's finest, or so they claim to be. These men of a once-proud nation sign up in droves, but many are also conscripted to serve the country's best interests. Their uniforms, very similar to that of standard Stormtroopers, are very fancy with tall, shiny black leather boots, a leather cuirass, a dark blue uniform and trousers underneath, and a distinct pickelhaub helmet bearing the golden Saxony wolf emblem. They also wear extra flak padding on their shoulders, arms, and strap several stick grenades to the front of the cuirass.

These Saxon infantry fulfill all the same roles of standard Stormtroopers and more. Equipped with cutting-edge technology, they are armed with a machine pistol (also called a submachine gun). It has a rapid rate of fire and medium range, making these units very versatile and giving them good damage over time provided they can survive a protracted firefight. They work well with machine guns, letting them pin the enemy down while adding their own hail of bullets to the mix. They also benefit greatly from being able to have medics in the field to support them, and are slightly better equipped to combat light armor or enemies that have bunkered down using their grenades.

Grenadiers have less of a weakness compared to other infantry, being better in close quarters than Polanian Riflemen while outranging Rusviet Vanguards. However, they are still outranged by riflemen and will get picked off quickly if they cannot get in range quick enough, while suffering against vanguards if they cannot keep them at arm's length. they are somewhat more effective against armor but their grenades rearm slowly and are still hopeless against most mechs. If supported by armor, however, they can ramp up a lot of damage against their enemies.

The Stormtroopers are equipped with submachine guns, firing lots of pistol-caliber rounds at medium range. They can also can throw a grenade, effective against lighter armor and enemies behind cover. 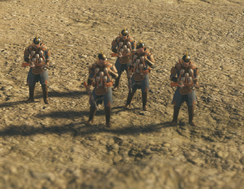 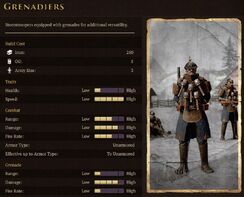 These units are differentiated with having stubble, a thick black mustache, and eyepatches (possibly indicating incidents with grenade shrapnel.)