The Saxon Heavy Explosive Cannon Pillbox is a structure that can usually be constructed directly by elite Saxon Engineers or upgraded from Saxon Shrapnel Pillbox. It is a fortified building with a long range HE Cannon that can not be rotated to face any direction, so it is necessary to choose the orientation when building it. Players can place men inside the bunker so the infantry squad can cover its flanks, as the HE Cannon will only be facing forward.

Instead of concentrated damage on single target (unlike bunkers of other factions), the HE cannon focused more on splash damage - which the explosive shell it fires is more effectively against packed groups of mechs. 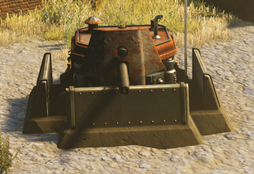 The "Cannon Bunker" from Early Beta