Can be Upgraded to

The Saxon Shrapnel Pillbox (previously was a MG bunker in early beta) is a structure that can be constructed by veteran Saxon Engineers or upgraded from normal Pillboxes. It is a fortified building with a grenade launcher that can not be rotated to face any direction than the front, so it is necessary to choose the orientation when building it. Players can man the Pillbox with an infantry squad to cover its flanks, as the weapon is only forward-facing.

The Shrapnel Pillbox, instead of suppressing enemy infantries, the purpose is to inflict damage to large groups of threats effectively through continuous explosive charges. Unlike the bunkers of the other factions, the rounds fired by the Shrapnel Pillbox are lobbed and thus can be devastatingly effective when placed behind the edge of a cliff; the enemy will not be able to fire at it directly without a sufficiently-tall unit while the Pillbox will be able to lob shots over obstacles. 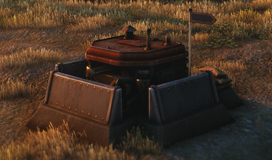 The old Machine Gun Bunker from the Early Beta.