Can be Upgraded to

The Saxon Unarmed Bunker is a structure that can usually be constructed by Saxon Engineers in the early stages of a match. It is a basic fortified building without weapons that can be rotated to face any direction, so it is necessary to choose the orientation when building it. That's important, because it can be upgraded to an Saxon Shrapnel Bunker. Players can man the bunker with an infantry squad that will engage enemies in all directions around the bunker. The infantry squad inside the bunker will utilize their own, specific weapon type. 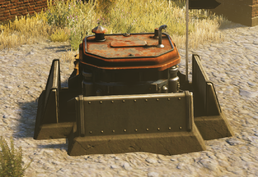 Saxony Bunker during the old Beta.
Community content is available under CC-BY-SA unless otherwise noted.
Advertisement