Note: Aside from the fact that the story of Iron Harvest as well as the story of Scythe take place in the World of 1920+ by Jakub Różalski, these two games are entirely independent.

Scythe is an engine-building, asymmetric, competitive board game set in an alternate-history 1920s period. It is a time of farming and war, broken hearts and rusted gears, innovation and valor. The base game is 1-5 players with expansions increasing that to 1-7.

Created by lead designer Jamey Stegmaier with the assistance of Morten Monrad Pedersen (solo variant) in the stark but beautiful world of artist Jakub Różalski, Scythe was successfully funded via Kickstarter and was released in August 2016.

Card sizes (for sleeves; this includes all cards in the Kickstarter versions):

Each player begins the game with different resources (strength, victory points, movement capabilities, and popularity), their choice of several faction-specific abilities, and a hidden goal. Starting positions are specially calibrated to contribute to each faction’s uniqueness and the asymmetrical nature of the game.

Scythe gives players almost complete control over their fate. Other than each player’s individual hidden objective cards, the only elements of luck are encounter cards that players will draw as they interact with the citizens of newly explored lands and combat cards that give you a temporary boost in combat. Combat is also driven by choices, not luck or randomness.

Scythe uses a streamlined action-selection mechanism (no rounds or phases) to keep gameplay moving at a brisk pace and reduce downtime between turns. While there is plenty of direct conflict, there is no player elimination, nor can units be killed or destroyed.

Every part of Scythe has an aspect of engine-building to it. Players can upgrade actions to become more efficient, build structures that improve their position on the map, enlist new recruits to enhance character abilities, activate mechs to deter opponents from invading, and expand their borders to reap greater types and quantities of resources. These engine-building aspects create a sense of momentum and progress throughout the game. The order in which players improve their engine adds to the unique feel of each game, even when playing one faction multiple times.

It is a time of unrest in 1920's Europa. The ashes from the first great war still darken the snow. The capitalistic city-state known simply as “The Factory,” which fueled the war with heavily armored mechs, has closed its doors, drawing the attention of several nearby countries.

Each player in Scythe can deploy up 4 mechs to assert force over the uncharted lands surrounding the Factory and to protect their workers and territories. Each mech is linked to a special ability, most of which are unique to each faction. When a player deploys a mech, that player’s mechs and character all gain the ability.

Republic of Polania (white): The Polanian mech is inspired by the streamlined look of airplanes and submarines. It has the ability to submerge into a lake and–by using the underground river system–surface on any other lake. It’s also people-friendly, as the Polanian player can use the mech to gently push opponent’s workers off of territories without losing popularity.

Saxony Empire (black): The Saxon mech is built for tunneling through narrow passages in the mountains of Saxony and beyond. You don’t want to face a Saxon mech in combat in the dark depths of a tunnel.

Crimean Khanate (yellow): The Crimean mech is pieced together from the scrapyard, as the Crimeans rejected the idea mech technology until it was too late. It specializes in traveling long distances and can allow a player to scout and steal an opponent’s combat card before combat begins.

Nordic Kingdoms (blue): The Nordic mech is inspired by Viking longships. It has the ability to both walk on land and sail on lakes, and it comes with long-range artillery to damage the opponent before combat even begins.

Rusviet Union (red): The Rusviet mech, with its war scythes, is a formidable figure on the battlefield. It has access to a secret network leading from villages to the Factory. It also becomes more powerful in combat when accompanied by workers.

Clan Albion (green): The Albion mech, inspired by Scottish bagpipes, has a rotating array of weapons that can be used for attack or defense. It also has the ability to use tunnel territories as a guide to cross rivers, and they can quickly cross great expanses to rally to help endangered workers.

Togawa Shogunate (purple): The Togawa mechs are built to sustain even the harshest elements, particularly water. They’re built for solo combat and adventures, not pack hunting. And they include several devious contraptions that allow them to rearm traps laid by Akiko and Jiro.

While empires rise and fall in Eastern Europa, the rest of the world takes notice. Two distant factions, Albion and Togawa, send emissaries to scout the land and employ their own distinct styles of conquering. Invaders from Afar, an expansion for Scythe, adds two new factions: 10 miniatures, 62 custom wooden tokens, and 2 faction mats. It also includes some new cardboard tokens, two new player mats, six Automa cards, and a custom plastic insert designed to fit into the expansion box or the original Scythe box.

In the airship module, 2 airship tiles are randomly paired at the beginning of the game (1 passive and 2 aggressive; there are 16 total tiles). Each player’s airship miniature (a new type of unit; 1 big miniature for each of the 7 factions [the sculpts are identical, and the bases are different colors to match the factions]) has those abilities, as well as the core ability that airships are free to move onto any territory (land or water) and across rivers. Each player starts with their airship on their home base, so they can start moving out of their home area right away. The airship miniatures measure 101x33x41mm, and they have clear, plastic, removable stands/bases.

In the resolution module, resolution tiles add a twist to the way each game ends. There are 8 of them, and 1 will be used each game. They often have an impact in the decisions you’ll make throughout the game.

The Rise of Fenris[] 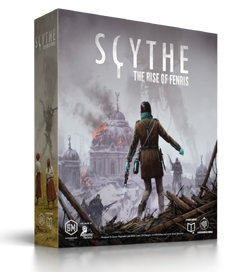 Empires have risen and fallen in the aftermath of the Great War, and Europa stands on the precipice of a new era. The economy is robust, morale is high, and defenses are strong. There are reports from the countryside of strange soldiers with glowing eyes, but they seem distant and harmless.

The Rise of Fenris, the conclusion to the Scythe expansion trilogy, enables two different options for any player count (1-5 if you have Scythe; 1-7 players if you have Invaders from Afar):

While the exact nature of the episodes and modules will remain a mystery (most of these components are in 5 secret tuckboxes and on 6 punchboards), the components in this expansion include a detailed episodic guidebook, 13 plastic miniatures, 62 wooden tokens, 2 custom dice, 25 tiles, and 100+ cardboard tokens. 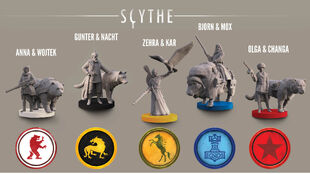 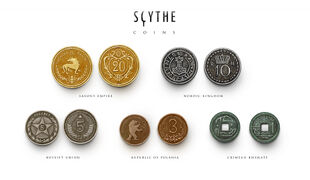 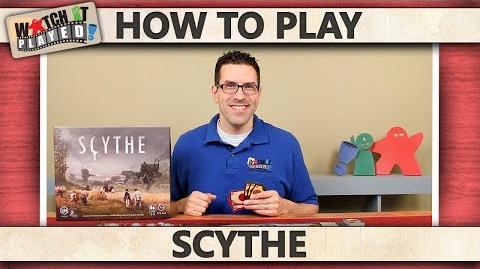 Scythe - How To Play 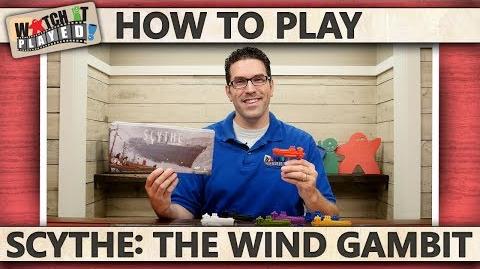 Scythe The Wind Gambit - How To Play 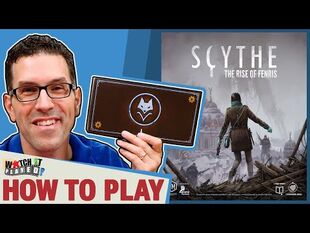 Scythe- The Rise of Fenris - How To Play