A hulking mech outfitted with a rotary gun for use against infantry and light armor.

The Sd. KS 49 "Grimbart" is a mech unit produced by the Saxony Empire. It excels in fending off infantry and can take a few hits in the process.

The Sd. KS 49 "Grimbart" was instrumental in breaking through fortified positions during the Great War, impervious to small arms fire while equipped with devastating machine guns of its own. It remains one of the most popular mechs in the Saxon arsenal, and increasingly replacing traditional machine gun teams.

Compared to its Polania Republic counterpart, the PZM-9 "Straznik," the Grimbart is built with defense and durability in mind. The body is much bigger and covered in thicker armor; it is a bullet-proof box on very short legs with two spindly arms. The right appendage boasts a large rotary Gatling-style machine gun while the left arm is equipped with a pinching claw. The whirring sound of the mech spinning up its machine gun spells doom for anyone caught in its field of fire.

The fairly flexible Grimbart is excellent at taking out unarmored enemies and even does fairly well against light armored units. Even large groups of regular infantry like Riflemen and Vanguards have little effect on its armor, and it can easily cut down swathes of them in return. One-on-one and head-on, enemy light mechs like the Straznik will often lose out as well.

However, due to its stout build and heavier armor, the Grimbart is quite slow. This leaves it vulnerable to artillery and it is relative unable to react to attacks from all directions. It will take extra damage from anti-mech units like the PZM-11 "Lowca" or field cannons, as well as attacks from behind. The Grimbart also has slow movement and turn speed making swifter units able to out-run and out-maneuver it. Overall, the Grimbart is best used against infantry and light armor types in conjunction with heavier anti-armor units to deal with mechs.

Its sole armament is an upscaled, large-caliber rotary cannon like a Gatling gun, giving the mech an increase in firepower and anti-armor capability over its Polania cousin. While firing a slightly smaller burst than the Straznik's pair of twin-linked machine guns, each bullet does over three times the unarmored damage. The gun also enjoys a slightly increased range, making it less easily kited by the Straznik's guns. 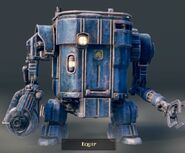 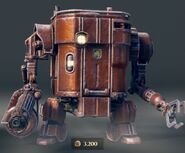 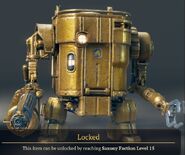 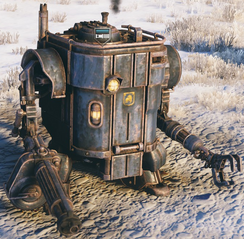 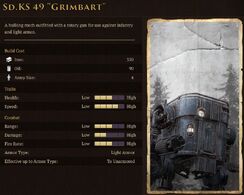 "Far From the Frontline" by Jakub Rozalski 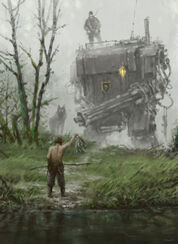 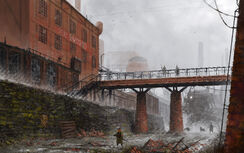 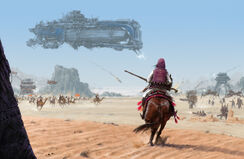 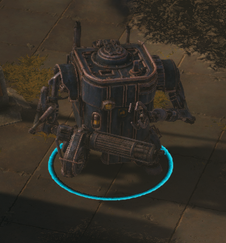 The "Grimbart" tapping it's Gatling gun with it's other hand during it's idle animation.
Community content is available under CC-BY-SA unless otherwise noted.
Advertisement