A frontline walker capable of both dealing and taking damage.

The Sd. KS 78 "Isegrim" is a mech unit produced by the Saxony Empire. It is a highly versatile unit with few true weaknesses.

The Sd. KS 78 "Isegrim," a unique, quadra-pedal mech with an advanced rotating turret spouting an armor-piercing gun. It has proven equally effective against infantry and exosuits, and has become the general-purpose mech of Saxony.

Designed much like a conventional tank, but instead of caterpillar tracks it walks on four long, finely-crafted, crab-like legs with cables almost trailing along the ground. The sleek body is smooth and simplistic, and the turret atop the chassis is fairly small with a medium-sized cannon. The drive unit at the rear is fairly well protected with a small smokestack.

Few of the Empire's glorious mechs embody versatility quite like this rather elegant walker. It is fairly durable for its tier, has respectable damage, an accurate and strong cannon with splash damage lethal to infantry, and respectable speed. It can perform and respond to almost any task equally well. Its turret can turn to face a target, which allows it to respond quickly to a changing battlefield situation without having to turn the entire chassis to do so.

Its main weakness is its relatively low damage against heavier units. Like most mechs, it is also vulnerable to attacks from behind, and anti-mech attacks there will bring it down fairly quickly. The PZM-11 "Lowca" out-armors it, so it can weather its cannon fire long enough to get in range for its lethal harpoon attack. A number of these mechs still make a valuable addition to any Saxony force, particularly if paired with the SKS 156 "Wotan" whose firepower synergizes with the speed and durability of the Isegrim.

The Isegrim has a turret, which is able to fire four shots in a row. The cannon is stronger against light armor but is also fairly powerful against small groups of infantry, but is diminished against medium armor and suffers against heavy armor. 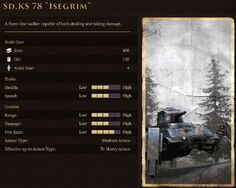 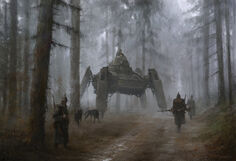 "The Symbol of the Empire" by Jakub Rozalski

"First Harvest After the War" by Jakub Rozalski

"Guest from the West" by Jakub Rozalski

Alternate Variant of the Isegrim as painted by Jakub Rozalski 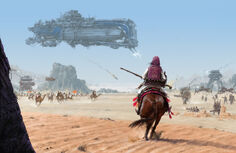