The Factory was a mysterious location (and possible faction) in the 1920+ universe. It's an independent city-state known for its advanced technology and industry that has closed its borders.

Little is known about it, but it has recently become a focus for all the warring factions, each sending their military expedition/task force lead by combat veterans/royal family members to gain control of it.

Described as a sprawling city-state, it is a place of technological innovation, invention, and massive industrialization. It is unsure how long this place has existed as an independent state, but was possibly started and ran by Nikola Tesla, the inventor of automachines like the mechs the city is famous for producing. It seems to exist along the Polania Republic's southeast border, sharing a border with Polania to the north, the Saxony Empire to the west, and the Crimean Khanate to the east.

The machines and devices that are developed within this complex are known to blur the line between science and magic. Extremely advanced, many of these machines make use of wireless power, energy weapons, electric power sources, and extremely intricate mechanisms giving them myriad functions. These machines are also visually distinct with a curved, organic aesthetic with many glowing blue parts.

Prior to the Great War, the city churned out hordes of walking machines known as "mechs" to supply each nation's armies and to power their industry, as well as other forms of technology. Then came the Great War, where these mechs devastated the towns, cities, landscapes, and killed untold numbers of men on the battlefield. Many of their wrecks are still being uncovered long after, what is termed now to be "the iron harvest."

Then, as tensions between the European powers once again began to slowly boil over in 1920, without a stated reason the Factory completely closed its borders and shut down. Currently all major factions have an interest in the factory to secure military superiority over their neighbors, including the Polania Republic, the Rusviet Union, the Saxony Empire, Nordic Kingdoms, Togawa Shogunate, Crimean Khanate and Clan Albion.

After the Factory was shut down, Nikola disappeared, along with his daughter Vesna.

Then, one day, unknown mercenaries breached the inner holds of the Factory and captured Tesla and Vesna, forcing him to work on advanced and deadly machines for them. Vesna, now a grown woman, managed to get out a call for help to all the nations of Europa to rescue them. When Vesna's new allies arrived and rescued her, Nikola had been taken elsewhere by the mercenaries who worked for Fenris: an underground seditionist cabal.

By capturing Fenris agents and extracting information from them, she determined that they and Tesla were holed up in the Factory, guarded by Fenris' new and fearsome "Fenris Annihilator" mech. Although this mech was defeated, Nikola was still hidden away, and Fenris had only gained power elsewhere as well as more Annihilators. Their leader, Grigori Rasputin himself, then revealed the faction's true agenda: dominion over Europa. Having already infiltrated major factions and with Tesla forced to develop technology, they now had the means to seize it for themselves.

Vesna would succeed in rescuing her father, dealing a major blow to Fenris' goals.

Sometime around 1900, Nikola Tesla founded the Factory as a place for inventors and engineers to come and work for him to help create the automachines. These mechs were then used to create an advanced "city of the future" around the Factory in just five years where he hosted tens of thousands of workers and their families. These machines were intended to exponentially improve agriculture and industry to lessen the burden on humanity. Inevitably, the great nations of the world weaponized their mechs to supply their armies with never-before-seen firepower. This forced Tesla to install extremely powerful defenses and he refused to produce war machines for those nations, although he did produce combat mechs for the city's defense.

In 1905, Rusviet, likely under the heading of the secret organization Fenris attempted to seize the factory by force and take Tesla's prototypes. The city's technology advantage won the war, but this made Tesla all the more paranoid that his creations would just be used for evil purposes such as war.

At some point, he had the factory shut down, sealed off, and upgraded more powerful defenses rigged around it that would fry anyone or anything that tried to get in. These included massive tesla coils 'or TF-144 "Zavojnica" when selected ' that would fry anything in range, tunnels to rapidly deploy swarms of drones and troops, and a large standing army of highly advanced mechs and exosuits as well as regular armed citizens. On top of this, he created one last and (some would say) drastic failsafe: the Icarus Protocol. The city at large fell to ruin and was abandoned, but in the inner sanctum many of Tesla's employees continued to work and invent. Other than that, Tesla had been in self isolation for 15 years till 1920, shortly after the Great War finally ended.

Rise of Fenris and Assault on the Factory[]

It was at this point when Tesla discovered that Fenris, under the leadership of Grigori Rasputin, was behind the 1905 attack and the ones behind the ignition of the Great War. Hell bent on exploiting the chaos for their own gain, they also seek to take control of the Factory again. They began hunting down two former Tesla employees: Piotr Kos and Heinrich Steinnmetz, regarded as "keys" to the Factory itself. Both had taken up peaceful, hidden lives in the Polania Republic, so Colonel Lev Zubov was dispatched with his forces to secure these important targets. He eventually managed to capture Kos and established a blockade around the Polanian city of Kolno where Steinmetz was reported to be living. Piotr Kos, however, even under extreme torture, refused to divulge any of the Factory's secrets, and died shortly due to the grave injuries he sustained, being rescued too late by his daughter Anna, his older brother Lech, and the Polanian Resistance.

Heinrich managed to escape for a time, but also refused to give any secrets, choosing to blow himself up instead. Zubov did, however, did recover a special transponder from Piotr Kos's arm that would allow his forces to breach the Tesla coil towers defending the Factory, and finally the Rusviets fought their way past the substantial defense force into the inner sanctum where Tesla himself resided. Not long after, Anna and the Polanian Resistance arrived and laid siege to the Rusviet forces, failing to gain much ground until Saxony rebels under Gunter von Duisburg and Olga Morozova arrived and offered assistance. Shortly after retaking the factory and capturing Zubov, however, Tesla's ultimate invention the TF-1597 "Icarus" was activated: a huge unmanned three-legged tripod machine with impenetrable armor that would release a massive, lethal EMP blast in a 20-kilometer radius, melting anything metal to ensure nothing of Tesla's work could be salvaged. Nonetheless, Icarus was stopped by an allied force of Rusviet defectors, Polanian resistance fighters, and Saxonian rebels, but now the Factory was more vulnerable than ever to anyone who would exploit its technology, including Fenris.

Resolving to bring down the organization with Tesla's help, this new alliance of the three armies began to dig in and repair the city as best they could for the inevitable assault by Fenris. 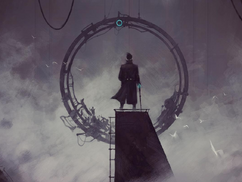 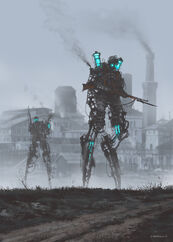 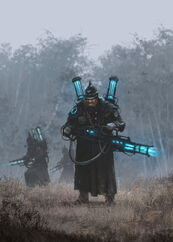 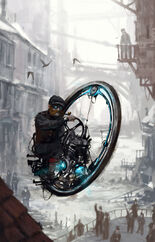 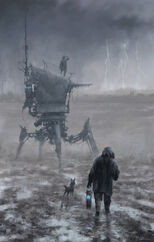 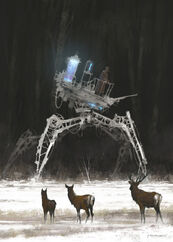 "Stranger in the Wood" by Jakub Rozalski 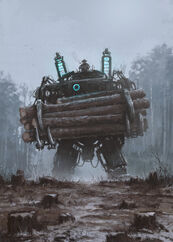 "The Destroy of Nature" by Jakub Rozalski 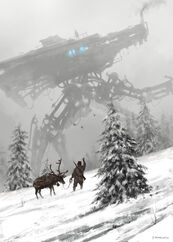