The Togawa Shogunate is a faction and nation in the 1920+ universe.

A shrewd and clever faction, they aim to expand their borders.

Togawa exists as a military dictatorship nominally ruled by an Emperor, although under the de facto leadership of the Shogunate. Their borders are currently unknown, being the eastern-most faction in the world stage far from the affairs of Europe. Their symbol is a purple circle with a pair of dancing koi fish.

Little is known about this eastern nation, and for a good reason as they operate largely in secrecy. Strictly isolationist, they only recently entered the world stage when the Rusviet Tsardom kidnapped one of their foremost engineers. The Shogun then sent his niece, Akiko, with a strong military force to recover her brother and to acquire any technical knowledge the Factory may yield.

Their military tactics revolve around attrition warfare, area denial, stealth, and subterfuge such as the use of traps to wear down their enemies. The Togawa mechs are built to sustain even the harshest elements, particularly water. Designed with a smooth, spherical body on four spider-like legs, they’re built for solo combat and adventures rather than pack hunting. They include several devious contraptions that allow them to rearm traps laid by Akiko and Jiro.

Maifuku: After moving, a character may place a trap token on its territory. Depending on the token, enemies triggering the trap will lose one of the following: 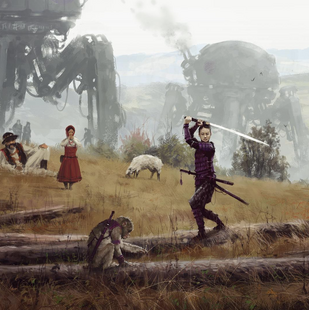 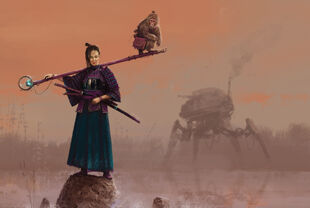 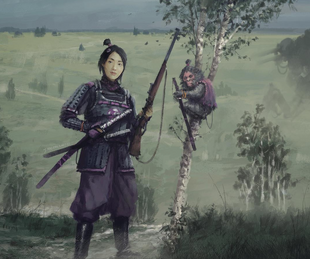 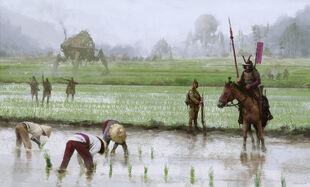 "Invaders from Afar" by Jakub Rozalski 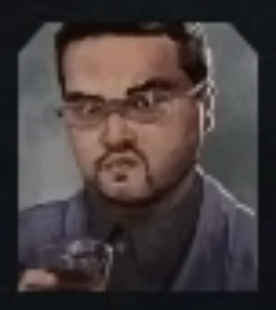