Tsar Nicholas was the ruler of the Rusviet Tsardom. He was close friends with his head of security Olga Morozova. His power was weakened, however, due to a revolt led by Grigori Rasputin, who ultimately betrayed him.

Unlike his cousin, Kaiser Friedrich of Saxony, Nicholas was a tall and handsome man with reddish brown hair, a slightly curled mustache and no beard. His uniform of office comprised of a forest-green coat with a high collar and gold-embroidered cuffs, lapels, all with a red sash. He also wore a series of medals.

When disguised, he wore a white shirt and black pants with suspenders and a cap.

Born into Rusviet nobility, Nicholas rose to power in Rusviet sometime before the Great War. He married and had a number of children, one of whom his wife arranged to have dance lessons with the mother of Olga Morozova. This acquaintance developed into a relationship of trust between the Tsar and Olga, whom he would hire as his head of security later on. He came to trust her with his life, even allowing her to chose the locations of his emergency safe houses. He would also take on Grigori Rasputin as his chief advisor, despite the rumors about the man including hints of debauchery with the Tsarina. Nicholas did not know, however, that the rumors were the least of his worries: Rasputin ed an underground organization named Fenris, whose goal was overthrowing the nations of Europa and seizing power.

As ruler of Rusviet, Nicholas strove to be a compassionate but strong leader; the horrors of the war eventually drove him to try and establish peaceful relations with his cousin, Kaiser Friedrich of the Saxony Empire. However, this dealt a blow to national pride and weakened his position, while Rasputin continued to undermine him. Murmurs of revolution began to grow across the country, aggravated by Fenris which still operated from the shadows.

In 1920, Nicholas succeeded in arranging peace talks in St. Petersburg between Rusviet, Saxony, and the Polania Republic. The talks were, however, interrupted by a brutal attack by insurgents who led an assault on the palace, which was all but defenseless with the loyal garrison having been poisoned. Colonel Lev Zubov held off the attack with his men, all of whom including Zubov were secretly Fenris agents. The palace caught fire before Olga arrived and ran inside, narrowly rescuing the Tsar when, outside, Zubov used his mech's cannons to try and bring the building down. This failed, as Nicholas was safely extracted (although Zubov was not caught.) Despite the attack, the talks were successful in negotiating a ceasefire.

The result security scandal forced Nicholas to publicly dismiss Olga as his head of security, but he secretly dispatched her to root out Fenris, whom Nicholas was made aware of thanks to a letter from Nikola Tesla.

In the following weeks before Olga would return, the situation in Rusviet worsened to the point where full-blown civil war erupted across the country. Thanks to misinformation from Rasputin, whom the Tsar was still not aware worked against him, Nicholas did not know just how bad things were. Zubov's assault on the factory was played off as betrayal on Zubov's part, as was Olga's alliance with the Polania Resistance and Saxony rebels. Even worse, Fenris collaborators posing as loyalist troops were raiding the civilian populace in his name, damaging his position further and energizing the revolution.

Nicholas decided to evacuate to a safe house outside the capital, although Rasputin once again betrayed him to the revolutionaries before abandoning him. Fortunately, Olga arrived and drove off the attackers. Nicholas took some convincing, but decided to return to St. Petersburg to confront Rasputin and Zubov. He ditched his royal attire for common clothes to help avoid notice while they stole a boat to sail into the capital. As Olga's forces fought their way to St. Petersburg, Nicholas became truly aware of the state of his country, the poverty of his people, and the devastation of the war as well as Fenris's actions.

Arriving in the harbor, Nicholas came up with a plan to use a radio tower to broadcast a message to the nation, offering the so-called loyalists a chance to stand down, exposing Fenris, and hopefully uniting the people in the face of this threat while avoiding bloodshed. While Olga's forces held off the Fenris collaborators outside, Nicholas got the tower working. However, Rasputin had been waiting for him, and just before he could start the broadcast he was murdered by his once-chief advisor. Olga, although devastated, knew it was too late to save him, and retreated with what was left of her allies. 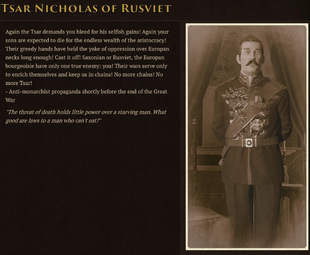 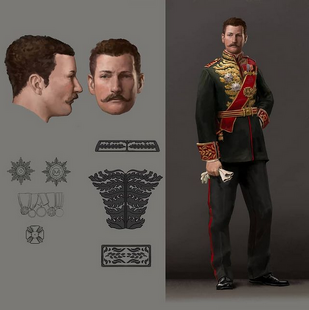