Usonian Grenadiers are upgraded infantry units trained by the Usonian Union. While they can still use their rifles afforded to them from being a Usonian Volunteer, they have the added bonus of being able to use grenades for more versatility. In multiplayer, Usonia is unable to train them, the only faction to have such a restriction.

Wherever the good fight is being fought, these enthusiastic and proud sons of the Union are always standing ready. Coming from many walks of life from industry to farming communities to even wealthy families, they take up arms to defend their country and its interests. They wear steel helmets, dress in khaki combat fatigues with a harness for carrying ammunition, brown leather flak vests, white breeches, and leather boots. Compared to regular Usonian infantry, they are additionaly equipped with additional metal armour plating on their torso, and a pair of goggles for additional eye protection, neither of which seemingly offer any additional degree of survivability, and serve only to slow them down on the battlefield. In addition, they're, fitting their name, equipped with several hand grenades, which they may throw. It is, in fact, encouraged.

Armed with semi-automatic rifles, they fit somewhere between Polania's Riflemen and Saxonia's Stormtrooper units. They do not have the range of Riflemen or the damage and firerate of Stormtroopers, but can outrange the latter and have a better damage output over time than the former. Compared to standard Volunteers, they deal the same damage and have the same health, but are slower and gain access to hand grenades, which they may throw to inflict heavy area damage on infantry targets, potentially wiping out an entire squad if they're bunched up, destroy cover and fortifications, decrew weapon systems or moderately damage light mechs. 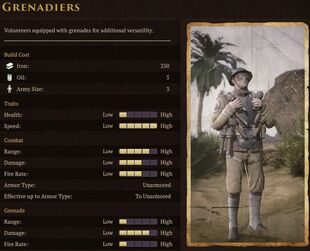