Volunteers (or Paratroopers if summoned by airdrop) are basic infantry units trained by Usonia. They are armed with state-of-the-art automatic rifles and form the core of the Usonian army.

Wherever the good fight is being fought, these enthusiastic and proud sons of the Union are always standing ready. Coming from many walks of life from industry to farming communities to even wealthy families, they take up arms to defend their country and its interests. They wear steel helmets, dress in khaki combat fatigues with a harness for carrying ammunition, brown leather flak vests, white breeches, and leather boots.

Armed with semi-automatic rifles, they fit somewhere between Polania's Riflemen and Saxonia's Stormtrooper units. They do not have the range of Riflemen or the damage and firerate of Stormtroopers, but can outrange the latter and have a better damage output over time than the former. Usonian Volunteers also arrive as Paratroopers when the paradrop bunkers trigger their beacon or if airdropped on the position of the M-8 "Attucks" artillery mech. With the ability to instantly produce these infantry at the front line (for a cost) the Union can more rapidly replenish infantry where they are needed than other factions to keep up the offensive.

Like all standard infantry, they fall short against even light armored mech units, machine guns, flamethrowers, and static defenses. Calling in Paratroopers can also be less cost effective than producing them at a barracks, so saving this ability for when it is needed is recommended. Use their speed and decent range to hide just behind armor to quickly gun down opposing soft targets and capture objectives.

In the multiplayer, Usonia can deploy paratroopers. They are specialized Volunteers who wear parachutes and they can be deployed anywhere on the map even the areas covered by the fog of war. Unlike normal Volunteers the paratroopers requires 300 iron and 35 oil to produce. 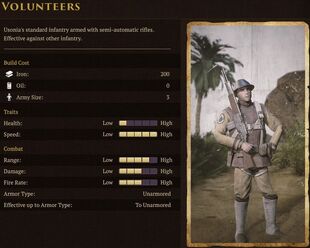 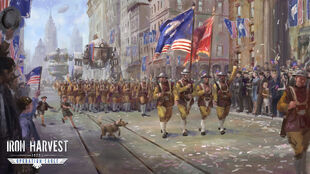 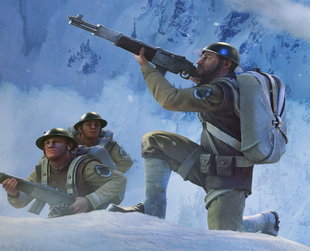 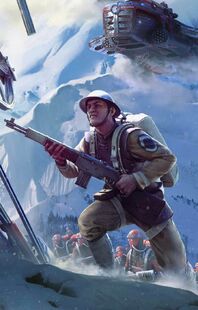 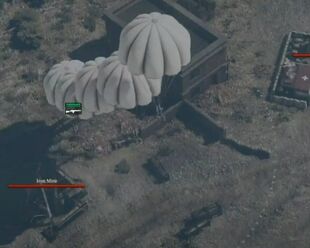