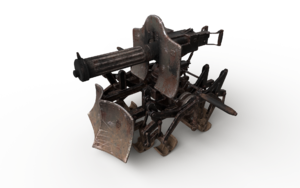 Weapon systems are powerful weapons that need more than one person to operate, like anti-mech cannons, heavy MGs, and mortars. Players can build these weapons or find them on the battlefield. A whole infantry squad is needed to operate and guard these deadly machines.

When players conquer a weapon system and order a squad to operate it, three men will operate the system while the rest guard it with their regular weapons. If one of the operators dies, one of the guards takes his place. If there are not enough soldiers left to operate the weapon, the squad abandons it and becomes a regular infantry squad once again.

Weapon systems are very powerful, but also slow. Soldiers have to push them around and they need time to set them up. All weapon systems have a cone of fire, so direction and placement are important.