"An ambitious officer piloting a cutting-edge exosuit which he can control remotely."

Captain William Mason is a hero of the Union of Usonia.

Considered by his superiors to be their "best man," he leads his forces in an advanced armored exo-suit.

William is a man with blonde hair and fair skin, clad in a leather-like full-body suit fitted with metal plates and mounting points for his most potent weapon; a highly advanced suit of mechanical armor. The armor consists of many hydraulic pistons, and his torso is well protected behind a hulking metal chest-plate and massive pauldrons. On the suit's back is a rocket booster, and his mech is armed with a sizable burst-fire cannon.

William is a hero with a fair bit of flexibility; he can tank and deal plenty of damage while in his mech suit or he can cover a lot more ground on foot while his suit holds position and defends an area. His cannon deals good damage to unarmored and light-armored targets, letting him duel anti-infantry mechs fairly easily while his medium armor shrugs off bullets. Similar to Anna Kos with her bear Wojtek, he can set his mech to hold its ground and distract the enemy while he gets out and flees, and can easily recall it to his position once reaching safety provided it hasn't been destroyed, in which case he can call in a brand new one after a cooldown.

While in his suit, William suffers from being fairly slow and struggles to keep up with faster infantry. While on foot he loses his protection and can be easily gunned down with enough fire, although his mech will continue fighting. His cannon has short range and his low speed makes it hard to close the gap. He also struggles with crowds, and thus requires a fair bit of support: he can absorb fire that would kill fellow infantry while they're free to get behind him and press the attack.

William grew up something of a pampered child in the limelight, as his family owned an expansive vineyard and was very wealthy. His father, George Mason, was also a famed Admiral in the Union's Mobile Air Corps. It was with this influence and wealth that he supposedly paid William's way through the West Point Military Academy where he graduated with the rank of Captain, despite carrying out a number a number of boyish pranks such as sneaking livestock into the girl's dormitory on one occasion.

Despite his privileged life, William proved to be a capable soldier, a strong leader, an idealistic and driven man, and was well liked by his troops. He became quite a public figure in Usonia, seen by many as "America's son." The Admiral, with help from a number of mysterious supporters, even helped arrange have William run for President of Usonia.

Soon after a civil war in Rusviet broke out, the Tsardom began to forcefully seize Usonian-owned properties such as oil refineries in the Alaskan territories (which were under Rusviet jurisdiction), threatening the business of big Usonian investors and oil firms. The Admiral convinced the President of Usonia to allow a swift and decisive military action to reclaim these Union assets, choosing William to lead an advanced force ahead of the fleet to disable anti-air defenses.

Deployed via parachute along with troopers and mechs, William initially deployed his chute with the rest of his unit, until one of his men collided with him and became tangled in their own parachute. Cutting himself loose, he dived to the rescue and saved the man, narrowly managing to survive a crash landing with only a minor head injury thanks to the rocket booster on his suit. Rallying his remaining forces, they took an airfield which allowed materials to be brought in for establishing a forward base. However, with this came press attention, and William met Randolph Wells; an investigative reporter who made allegations as to the real reasons for this operation. William, however, denied being a puppet for oil companies, seeing his mission as benefiting all American citizens back home.

Building up his force, William retook a key refinery in the area, but quickly became bogged down by a massive Rusviet counterattack that prompted the fleet to send heavy air support, and the battle caused widespread damage. Although the objective was accomplished, the battle was considered a public disaster back home, having broken Usonia's longstanding tradition of isolation. This also earned him the ire of his father whose supporters were displeased with the outcome in Alaska.

George gave William another chance by deploying him, off the books, to Arabia to convince the Bedouins there fighting to depose the Saxony Empire's occupation to request Union military support in their cause. He decided to take Wells with him, but while on-route they are shot down by Saxonian anti-air defenses, crashing in the desert. Some of his men were captured and held in a village, which William stormed to rescue them. When he was aided by a surprise attack on the Saxonians by raiders from the desert, he took his forces into the sands to find their leader, where he and his men nearly died from thirst and heat exhaustion.

After they are rescued by Princess Sita al Hadid, she explains that she leads the Free Tribe: a guerilla force of Bedouin trying to force the Empire out of Arabia and gain independence. William offers Usonia support; although Sita was initially hesitant, she acknowledges the previously hopeless fight and offers William a chance to let his actions speak for him. Together they free a number of prisoners including Gunter von Duisburg, his mechanic Frieda Ruete, and Polanian cavalryman Michal Sikorski. Gunter had been sent by Nikola Tesla to aid Sita's father in expelling Saxony but, with his death at the hands of her uncle, can only offer to arm and train the Free Tribe to liberate themselves. William takes a more bold stance and promises her quicker results with Usonian help, which Sita agrees with, provided that William withdraws all foreign troops once the mission is done. Together, they planned to sieze the Saxony-held city of Aqaba to rally the land to Sita's cause.

Succeeding in taking the city, William's plan goes awry when George's and King Khalid's forces arrest Sita, Gunter, Frieda, and Michal as part of George's own secret deal with the King to drive out Saxony, using Saxony's planned execution of Sita as a scapegoat to allow a permanent Usonian military presence to secure the land from the Empire.

No one left behind[]

William, unwilling to abandon Sita and their allies to their fate, takes his loyal troops and goes rogue, but not before having Wells expose the whole operation to the press back home with full documentation. After freeing the Europeans, they then storm the prison were Sita is held. She initially orders his arrest, unsure of his true intentions and assuming he was lying to her all along, but together they fend off a massive Saxonian counterattack.

Gunter and the others decide to stay and support Sita while waiting for mech support from Tesla, as well as evacuate some of her people to Tesla's factory; William resolves to return to Usonia, potentially facing execution for treason. He leaves after sharing an embrace with her, and Gunter remarks that William's heroic actions and sticking to his principles, as well as his role in exposing corruption, also give him a chance at the presidency.

His mech carries a cannon normally one would expect to be mounted on a heavier vehicle, firing a three-round burst of armor-piercing shells. While out of the mech suit, William is armed with a sizable revolver, which fires slowly but does fair unarmored damage. 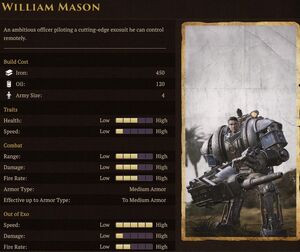 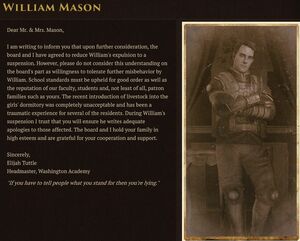 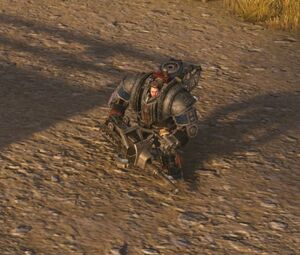 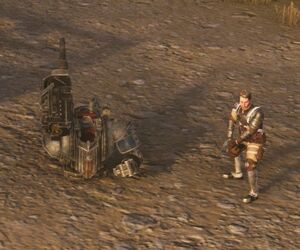 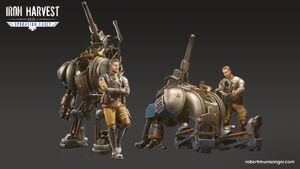 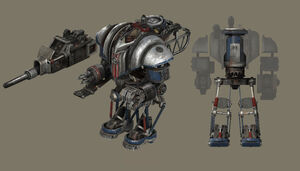