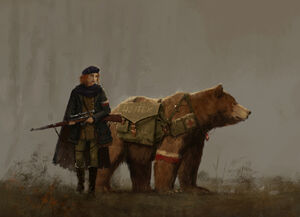 Wojtek (pronounced voytek) is hero of the Polania Republic. A hulking male brown bear, he is the constant companion of Anna Kos. Together with her skills as a sniper and his incredible brawn and ferocity, they are a powerful team.

While Anna was learning to hunt deer with her brother Janek, they were gutting the carcass when Wojtek's mother, likely desperately hungry, charged Janek. She was, however, killed by an intervening pair of Smialy recon mechs of the Polanian Army who carried away her body. While Janek left with the soldiers, Anna was collecting the deer meat when Wojtek, then just a small cub, arrived looking for his mother. Finding only her blood, he sat down and began to wail. Pitying the now-orphaned bear, Anna carried him home, where she would raise him. From then on he would be her constant companion and fierce defender. Although he seemed to get along well with humans, Anna's father Piotr made him stay in a cave some distance from the village.

One day, Rusviets entered the area looking for Polanian rebels, and Anna immediately ran to get the now-grown Wojtek just as they were ambushed by Rusviet Vanguards. With his help, they easily overpowered the soldiers and gathered nearby militia to drive the enemy from the village. When they were ambushed again, this time by Colonel Lev Zubov and his colossal mech, Anna was nearly crushed by falling rubble. Acting quickly, Wojtek grabbed Anna and tossed her out of the way, taking the debris on himself. Thankfully, he was not seriously hurt, and later carried the barely-conscious girl to safety.

Together, the pair rallied some Polanian Riflemen, liberated some POW's, recovered some lost mech units, and took a nearby train depot. A counterattack led by Zubov nearly crushed their exhausted forces, but reinforcements lead by Anna's uncle Lech allowed them repel the attack and rescue Piotr, who would unfortunately die from his injuries.

Together with Lech, Anna and Wojtek captured a war train full of supplies and set off to break through the Rusviet blockade around Kolno.

Being a bear, Wojtek needs no weapons but his size, weight, speed, claws, and teeth. He is very powerful against infantry units, and bullets barely even slow him down. Far more durable than Anna, he can even withstand protracted bursts from flamethrower mechs. He will aggressively charged unless ordered back by Anna, panicking enemy units into focusing all their fire on him while she picks them off from a distance.

Ferocious Attack/Call Wojtek: Wojtek charges into the fight once he and Anna are engaged, but if called he will immediately rush to his friend's side.

Passive: Wojtek is a helpful and good-natured bear outside of combat, and heals a nearby infantry unit over time. Once finished, he will seek out any other wounded troops near him.