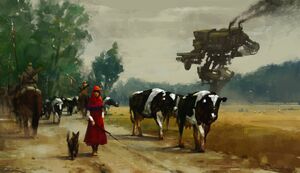 The World of 1920+ is an alternate universe to our own, mainly an alternate Europe in the early 20th century (After the Great War) created by Polish artist Jakub Różalski. This is a place where tradition clashes with modernity, and the world is still full of secrets and blank spaces on the map.

Initially, the 1920+ project was based on and inspired by the Polish-Bolshevik War of 1920 (February 1919 - March 1921). This war, and the Battle of Warsaw, is considered by many historians to be one of the most important in the history of the world. It altered the course of European history and halted the Red Revolution and the Bolsheviks' march to the West. It took great effort and sacrifice, but Poland managed to achieve it in just two years after regaining independence. Interestingly, few people in the West know about these events, except for history buffs. It was also the last war in history where cavalry was used on such a large scale and played a key role on the battlefield (though cavalry was used on a smaller scale in World War II). From there, Jakub started adding more themes, parties to the conflict, and heroes to shape the history of the world of 1920+.

In the Industrial Revolution era, humanity is fascinated by new technologies like steel and engines, and the industry is developing on an unprecedented scale. Experiments and attempts to build a steel walking machine begin. Of course, all this is driven by the governments, generals, and the powerful arms industry. As the arms race commences, conflict on a massive scale seems to be just a matter of time. Walking Automachines of various sizes and shapes start to intrude on everyday life and dominate the battlefields.

Like Europe and the world at the beginning of the 20th century, the World of 1920+ is full of contrasts, diversity, mystery, and unexplored places. In this world, the traditional way of life in harmony with the environment is gradually displaced by technology, powerful machinery, and heavy industry. Countryside landscape plays an important role in making the world of 1920+ feel unique.

The world is seen mainly from the perspective of countryside and rural life. People are focused on their own affairs and work, away from progress and inevitable change. Technological innovations and the industrial revolution arrive here last. When powerful walking machines gradually embed into their lives, they are no longer scary monsters looming on the horizon. People get accustomed to their presence, but it does not have much impact on how they live and what they do.

The 1920+ Automachines are not very advanced or futuristic. They are rather crude, massive and often rather awkward structures, resembling the first World War I tanks. Against this backdrop, a dark and sinister organization grows in strength, preparing to seize power over the belligerent, war-torn states of Europe.

The World of 1920+ has given rise to products outside of the artwork originally created by Jakub. This includes the board game Scythe as well as the video game Iron Harvest. Moreover 19.99 EUR T-shirts of the Saxony, Rusviet, Polania and all 3 factions too.