One of Usonia's massive flying carriers, launching autonomous drone to strike its targets.

The ZR-25 "Samson" is a heavy aerial mechanical unit produced by Usonia. It deploys a swarm of advanced gyrocopter drones which deliver explosive ordinance onto its targets at long-range.

The Usonian's air units often strive for an element of shock and awe, and this ship's size makes it no less capable of fulfilling that. The Samson is a wide figure with a central zeppelin and two supporting balloons to hold her aloft and steady, similar to a pontoon boat, while the drones are launched. At the rear is its primary propulsion: a trio of large propellers. A pair of Usonian battle flags extend from its rear, providing ample notice that the Yanks have come. The flanks of the Ship are occupied by six individual landing flats for its drones to land while re-arming.

If it were to be compared to the other factions, this is the Usonian "superheavy." The Samson is less of a battleline unit and more of a rear support ship. As such, when compared with its peers, the Samson has less in the way of pure armor, being a measly medium-class armor unlike most superheavies. However, to make up for this shortcoming, the Samson's actual HP pool is quite high, being 100 points higher than the Polanian Tur, 50 higher than the Rusviet Gulyay-Gorod, and 200 lower than the Saxon Kaiser. This makes it the second most durable unit in the game (in terms of HP), and coincides with the long range of her six strike craft, advanced Drones capable of carrying light bombs.

The most important aspect of this unit is its near-total reliance on its drones to inflict damage. Since drones can be shot down, groups of units can do enough damage to render its drone swarms mostly useless. This can be countered by using hit/run tactics to allow drones to regenerate, using additional carriers for drone spam, or quickly buying replacements with the Accelerate Production ability. As a last option, it is possible to reduce the period drones can be shot at by simply moving the carrier closer to its target.

Foremost among this ship's weapons is its compliment of small drones, which it sends to attack an enemy target by dropping bombs on it and returning to rearm. The Samson is capable of deploying six of bomb drones from independent housings. The Samson's armament also includes a pair Quad Autocannon turrets: one on the bow and the other on the stern. The anti-air guns are relatively weak but a valuable contribution to its defense.

Accelerate Production (Active) - This ability can be repeatedly activated, and essentially allows for replacement drones to be immediately purchased in exchange for resources. The closer to the carrier is to passively producing its own replacement drone, the lower the resource cost.

It is important to remember the carrier can produce its own replacements for free given enough time - only use the ability when it seems necessary. 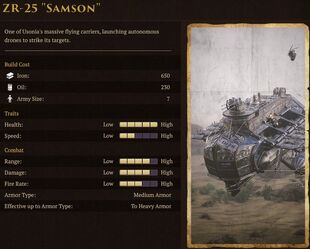 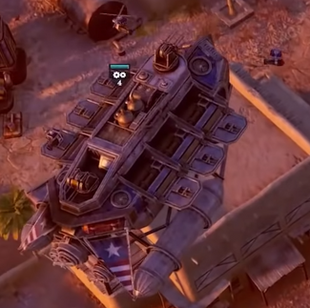 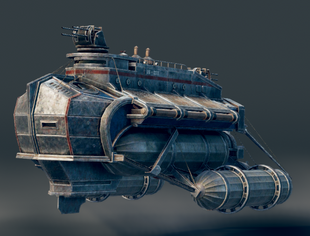 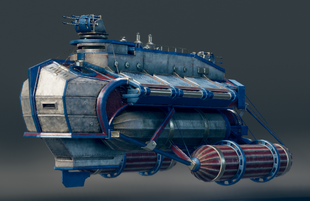 The faded "US-ESX" text on the side. 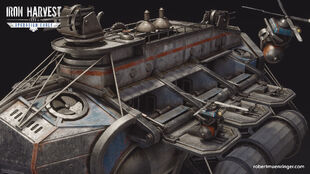 An official render of the drones Samson deploys. 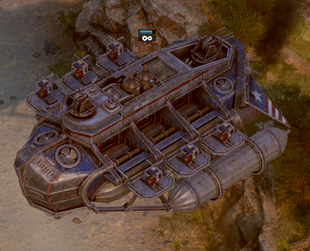 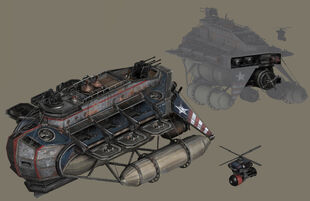