A light airship that can fires unguided rockets at both ground and air targets.

The ZR-3 "Revere" is an aerial unit produced by Usonia. Armed with rocket pods, it can attack both flying targets and ones on the ground.

The "Revere" is a light airship consisting of a small zeppelin frame with armor and numerous heavy rocket pods built around it. It is guided and kept aloft by a set of four rotating rotorblade sets. Main propulsion is one giant rotor blade at the back of the aircraft. Its crew are fully enclosed in a cabin of steel, with two forward-facing viewports assumedly for the command section. Slung underneath is a red tank, which one can guess holds the Revere's fuel supply for the additional booster engines.

The Revere acts the part of a mainline combat mech like the Sd. KS 78 "Isegrim", albeit in the air. It can handle a variety of combat situations, and is well equipped to whittle down small groups of light or unarmored units from above. Unlike conventional mechs, it is not hampered by terrain obstacles like trees, boulders, or buildings, and can simply take the shortest route to engage the enemy or use such obstacles to delay any ground-based pursuit.

The Revere's main weapons are a pair of large rocket pods, one strapped to either side of the carriage. If engaging ground targets, it will fire arcs of rockets down onto enemies, each shot having a wide area effect. If going against a fellow air-unit, on the other hand, it will accurately fire one large rocket at a time, using overhead pop-out rail launchers - these are visible as rectangular flaps above the rocket pods. 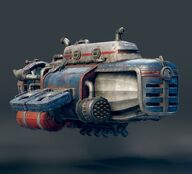 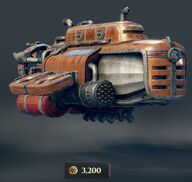 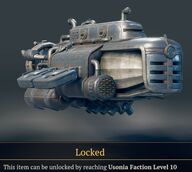 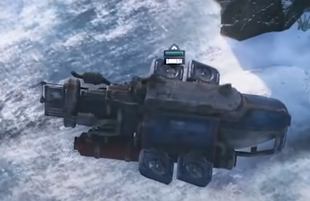 A Revere prowls near Alaskan ice 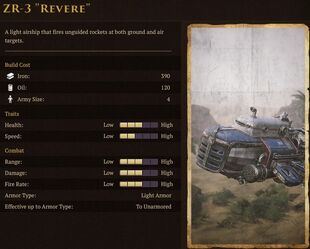 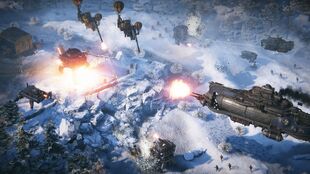 A Revere assists a Salem locked in battle with a Grimbart 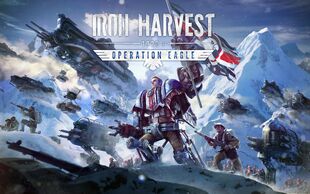