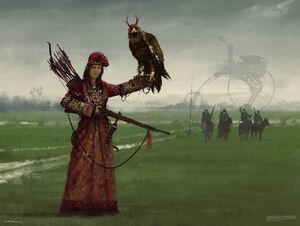 Princess Zehra was the firstborn daughter of the Khan of the Crimean Khanate. Despite her royal upbringing and against the will of her father, Zehra preferred to practice bow shooting and horseback riding rather than meekly drink tea with dignitaries. She found that she was able to see things before they happened, a skill that greatly aided her archery skills, especially for moving targets.

Zehra traveled the land with Kar, representing her family’s interests and serving the people. Tales of her bravery were spread far and wide by Crimean caravans and traders.

Steeped in the tradition and culture of their people, Zehra’s father was reluctant to adapt the new mech technologies developed by the Factory. However, he realized that the world was changing whether or not he liked it, and he didn’t want his country to fall too far behind. So he asked Zehra and Kar to go on an expedition to the north for the purpose of learning modern technology and ensuring peace for their people.